Some of you will know this story as it is one I wrote some years back. Just one of Brendan’s encounters with Ireland’s healer tradition…indeed, a shamanic tradition.

The cows had been de-horned that morning, but it wasn’t a good job. They were bleeding out. By late evening there was no improvement and Brendan was deeply concerned. He 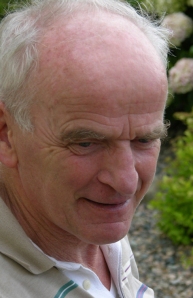 called a neighbor farmer for advice. “Well, now,” the neighbor said, “you could always call the vet. Though it is rather late.” There was a long pause before he continued. “Or I can give you the number of a woman in County Antrim.” Brendan took down the number and rang the old woman five counties away as the raven flies. “Now tell me, “ she said, “exactly what is wrong with your cows.” Brendan told her. “You’re sure now,” she pressed, “you’re sure that’s the problem?” Brendan assured her. “And now exactly how many cattle have you?” she asked. Brendan told her twelve. “Now you’re certain that’s the exact number?” she pressed again. Brendan was sure. There was a pause. The woman spoke some words Brendan did not understand. Then another pause. Finally the woman said, “Now I think if you go out to your cows, you will find they are all well and good.” Brendan thanked her and went directly to the barn to find the bleeding stopped, the wounds healed.

When I took his photo for this story, I mentioned my assumption that this event occurred when he, as the oldest boy of thirteen children, took over the family farm when his father died. Long before he became a teacher. Long before he retired as a school principal. “Oh, no,” he told me, “that was only four or five years ago. I still own land of the family farm. And still have cows.” he said, pointing over the stone wall to the animals in the adjacent field.