This is a story I will share around the Solstice Fire tonight. Will be a wonderful and powerful gathering…and we will have bagpipes this year! Magic. Magic.

It was the day before Solstice in the deep of winter. Snow swirled in the bitter cold wind. In the castle high on the hill above the village there was trouble. The great kitchen fire had 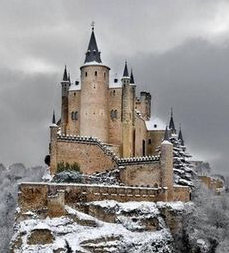 gone out. There was no flame to cook the food or make the big kettle sing. As people stood shivering in front of the hearth they wondered what had caused this catastrophe. Some said it was the wrong fuel they were burning in the fire, others ventured that all the quarreling in the castle over matters of state made it too cold for any fire to burn.

The King snorted. “No matter the cause,” he said, “we must have fire!” And he sent a messenger to the village to bring back coals from one of the hearth fires. So the messenger set out with a big iron lantern and made his way down the hill crying, “Coals. Coals. Coals for the castle fire.”

The door flew open as he passed the first cottage and a man stepped out. “Coals for the castle? Why yes, we have coals.” As the messenger filled the lantern the man said, “Of course tell the King we want as many gold coins as coals you are taking!” The messenger agreed and started back up the hill to castle. But he hadn’t gotten very far before the coals in the lantern turned cold. Leaving them on the side of the road he turned back to the village calling, “Coals. Coals. Coals for the castle fire.”

A door flew open at the second cottage and a woman stepped out. “Coals for the castle?  Why yes, we have coals.” And as the messenger filled the lantern the woman said, “And tell the King that he must make my son Captain of the Royal Guard.” The messenger agreed and started again up the hill. But before he had gone but a little way he noticed the coals had turned to ashes. So he dumped them out on the side of the road and once again turned back toward the village calling,”Coals. Coals. Coals for the castle fire.”

The third cottage he came to was small and in such disrepair that he decided to pass it by. But the door opened and a small girl leaned out. “Coals for the castle? Why yes, we have coals. Please come in and warm yourself by the fire for you look cold.” She offered him some of the hot porridge she was making for her mother and father who would soon return from cutting wood in the forest. The messenger finished the porridge and turned to go, thinking not to take coals from this humble family. But the girl insisted, so he placed one small coal in his iron lantern, thanked her for the fire and the food, and took his leave.

“This small coal won’t last long,” he thought to himself. But to his amazement the further we walked from the cottage the brighter was the glow from the lantern. As he made his way up the hill to the castle, the light grew brighter and brighter. And when he reached the castle and placed the coals among the grey logs in the kitchen hearth they burst into flames.

The new fire made the kettle sing more sweetly than it ever had before and warmed the hearts of everyone in the castle so they forgot to quarrel. The King was amazed and he

thought about this for a while. “This fire is bright and warm beyond anything we have known,” he said. “It must be because of the love that came with this coal from the cottage. For I now understand it is love that brings the gift of Light.”