When a child is sick a fairy woman is generally sent for,
who makes a drink for the patient of those healing herbs
of which she only has the knowledge.
Lady Wilde

There are seven herbs of great value and power;
they are ground ivy, vervain, eyebright, groundslel,
foxglove, the bark of the elder tree, and
the young shoots of the hawthorn.
Lady Wilde

It was from their great knowledge of the properties of herbs
that the Tuatha-De-Dannans obtained the reputation
of being sorcerers and necromancers.
Lady Wilde

Our ancestors, most especially our ancestresses, knew how to work with the energies of the Earth and plants for healing – as reflected in these quotes from Lady Wilde’s 1919 book on the legends and charms of Ireland. But knowledge is power and this power was too much for the emerging Christian churches. Between 1450 and 1750 they would instigate the persecution and killing of these wise women and healers. During what 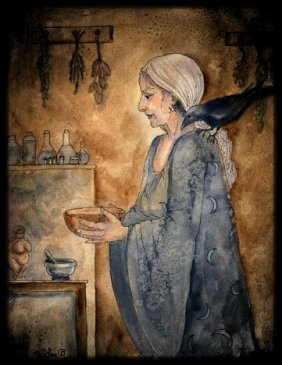 became known as the burning times, estimates range between 100,000 and 600,000 for the number killed. In some instances the females of entire villages were burned. Generations and a heritage of healing were lost to us.

I was delighted to learn that unlike England, Scotland, and Europe, records indicate only five or six women were killed in Ireland and then only because of one very ambitious bishop.

Standing in right relationship with the Earth would, for me, mean looking to her for healing. I eventually found plant based and plant spirit medicines for this journey with cancer but it was not without challenge. This traditional and indigenous wisdom is still very hidden and fragmented and certainly not honored by the contemporary medical communities who are generally disdainful and dismissive of plant based healing – and even fairly disparaging of my decision to go completely organic with all of my food. “Sure, if that makes you feel better and feel like you’re doing something constructive,” was a common response.

I was incredibly fortunate to find one of very few naturopathic oncologists in our area. Grounded in integrative therapies Dr. G. agreed that if the surgery was able to remove the cancer tumors, which it did, and if the CT scan showed cancer no where else in my body, which it did, then we would move forward with natural healing protocols. While I have no ground ivy, foxglove, or elder tree bark in my medicine cabinet, I do have seaweed, extracts of mushrooms, flax seed, and turmeric. All known anti-cancer plants.

However even Dr. G. could not entirely advocate for the one plant that has been among the most powerful of my protocols. As amazing as it is, the marijuana plant is still on the medical margins.