Herself an’ the priest in Feakle didn’t get on. He was telling people to keep away from her, an’ they were only going unknown to him. They didn’t want him to know they were going. An’ ’twas said he went to her after, himself, to get cured, that he was dying of cancer, an’ that she cured him.

Biddy Early, the wise woman of County Clare, was renowned throughout Ireland for her healing powers which were inspired by sacred realms yet based in the natural world. By carriage, horseback, and foot people lined up at her cottage despite 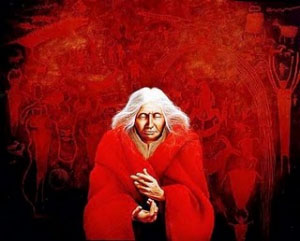 fiery pulpit condemnations. As one man observed when confronted by the Feakle parish priest, “Well, Father, cure me yourself if you won’t let me go to her to be cured. And when the priest wouldn’t do that he went on to her.” As Meda Ryan records in her book on Biddy, “For while she would and did cure people and animals, as well as crops, the parish priest could not: nor could the bishop, nor any other member of the Irish hierarchy. When people urgently wanted themselves or the dear ones or their animals to be saved, it was to Biddy they turned.” And from the above account so did the parish priests.

As I have walked my own journey with cancer I have reflected often on how these eighteenth century stories echo through my own experience. Turning to sacred inspiration and the healing powers of the natural world was not received well by contemporary medical practitioners. While there were no fiery pulpit speeches the disdain and even anger at my choices was made very clear to me. Support was denied me as much as the priests denied spiritual support to their parishioners who went to Biddy for healing.

In Biddy’s time the Church eventually gained the upper hand, driving healers underground. Fortunately this healing heritage flourishes throughout Ireland today. I am beginning to see hopeful signs that it will flourish in some aspects of contemporary medicine. Perhaps the echoes of healing power will be carried on the winds of change.

3 thoughts on “Echoes Of Healing Powers”