“…we saved Ireland’s capital from the disgrace
of allowing traitors to triumphantly flaunt
their crimes and treason before a
cowed and quiescent people.”
Irish Activist, Maude Gonne, 1933

Harsh words. But those were harsh times for the Irish, as these times are for us. It seems the theme of greed and self interest over governance is a thread woven through history. It is certainly present in our nation’s capitol today. It’s intrinsic and hardwired in our national system of governance. And it’s all about the money. 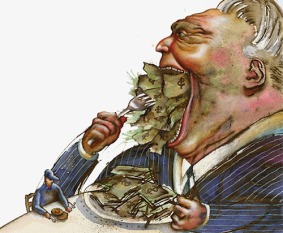 As reported in a Huffington Post story and just last year in a CBS 60 Minutes story, of every ten-hour day they are in Washington DC, our congressional representatives will spend four hours on ‘call time’ to raise funds, one hour for ‘strategic outreach’ fundraising, an hour to ‘recharge’, and the remaining four hours on the actual work of being a member of Congress. “The whole schedule of how work gets done is scheduled around fundraising. You never see a committee working through lunch because those are your fundraising times.” The goal: $18,000 a day.

With goals like that…well, they aren’t calling me. And they aren’t calling folks like Bernie Sanders supporters who averaged $27/donation. Nope. They are calling big donors, both individuals and corporations. It’s all about big money. The big money necessary to sustain the salaries, benefits, and massive infusions of capital that many of our national legislators clearly consider their due. The big money that, quid pro quo, ensures the perpetuation of big money for their major donors. What comes around goes around…and around again. It is a system that guarantees greed over governance. And now the Republicans in power, our brothers and sisters of the trough, are gorging themselves with much triumphant flaunting.

So. The point of this post? Expectations. Knowing that this is the nature of the swamp, now with even more gluttonous gators, is important in managing what we can expect of this very broken system. Well, broken for most Americans. It is working quite well for the oligarchy. As we resist the horrific philosophies and policies of the new regime, as we raise our voices and take to the streets, as we demand change, it’s important to be realistic about what we can expect…and what we cannot expect. If we want a system of governance not based on greed and self service, we cannot look to our nation’s capitol. We will need to look to the local systems of governance. We will need to look to ourselves. And there, the real work begins. Let us not be cowed or quiescent.

1 thought on “When Greed Trumps Governance”