She’s a hoarder by any clinical definition. She hangs on to everything and perhaps most tenaciously a grudge. Like a geologist she carefully mines every perceived slight or grievance and tucks them away in her specimen box. No matter the weight, she drags this 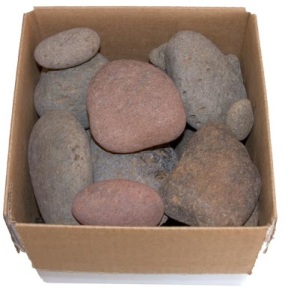 box out daily to examine her treasures and re-live their stories. It clearly feeds her at some level, but it’s poisonous for those around her.

We could see this poison taking it’s effect on Dad. Being perhaps the most conflict adverse person on the planet his response was to disappear mentally and physically. Watching his decline we warned that this toxic environment would lead to them no longer living together. But nothing changed. Last December she decided the solution to all this was forgiveness. She discovered a book through her bible study group and bought a copy for everyone in her family and ours, taking care to underline every single sentence of the chapter on forgiveness. She hoped we would accept her and acquiesce in the situation. That we would say, “Hey, it’s all good,” and carry on.

But forgiveness is not about carrying on. Especially with a box of rocks. It’s about release. Forgiving is for giving away those grievances so we can come back to the balance and harmony of our sacred nature. For giving away those burdens that don’t serve us. In this time and energy of fall the Earth teaches us yet again to let go. It is the perfect season for giving away.

A footnote. Nothing changed in this story. Dad had a medical crisis after which the doctors would not release him back to the apartment he shared with her. No longer in that toxic environment his mental, emotional, and physical recovery has been astounding.