My husband woke up one morning with a slug tangled in his long hair. We were living in a tipi for a year while we gathered together the recycled lumber to build our house. Slugs aside…and they were aside, inside, and outside…it was a year of coming to appreciate why it was the plains tribes that lived in tipis, not those living in the coastal rain belt of the Pacific Northwest. Silly white people. But it was romantic. It was a year of living on the Earth. It was a year of living round. And it was one of the best years of our relationship.

From the American plains to Tibet to Africa and beyond many indigenous cultures lived in round houses. And many still do. What I 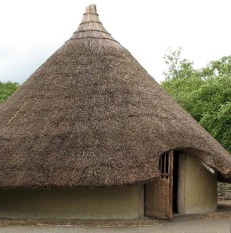 didn’t realize was that living round was also part of my indigenous heritage. The Irish lived in round homes and the first time I entered one, albeit a reconstruction, I felt an immediate and powerful resonance. There is such harmony in a round space. Energy flows differently. It doesn’t get lost in the corners. And neither do the people. Living round holds such beauty, simplicity, and grace. What did they know that we have long forgotten?